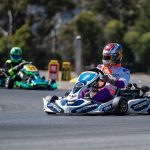 The penultimate round of the 2019 season took us to sunny Lithgow last Sunday, for a 444 lap sprint race at Combined Districts Kart Club.

To this point the season had been dominated by the factory Maverick Karts, notably #58 claiming the first five races of the season including the State Title, while more recently Sister kart #59 took two from two victories at Port Macquarie. Among that, one victory to Preston Hire 15 at Grenfell was the only blemish on the Maverick record.

As has been the case for many years now with the competitiveness of the category, most teams turned a one-day race meeting into two, arriving on Saturday to turn some extra practice laps. This may have been more of a hindrance than help for some, as sharing the track with other categories meant split sessions of short length only.

Fast forward to Sunday – the auction of all auctions took place on the out-grid after drivers briefing. As a club fundraiser, the first three rows of the grid were up for sale to the highest bidders. It kicked off online with a few low-ball bids and not much activity, however gained mega traction on Sunday morning with half a dozen or so teams going at it to get that clear track into turn one. Justin always tells us he could pitch anything and he proved his worth, selling Pole Position for a whopping $250, not to mention the next five places, which is a huge boost for the club and we are very grateful to everyone who bid. The only problem – the first three karts on the grid were from the Maverick stable, so what we thought would be a good photo opportunity for some teams who struggle to find the pointy end in qualifying, didn’t eventuate! Their B grade kart 56 was the pole sitter though, not the usual suspects but the same colours nonetheless.

There was still an important qualifying session to follow, filling grid places 7 to 25. Our CoreStaff Recruitment $100 awards would come from this session, with Pole Position (starting grid 7) going to Drew Russell in Maverick 58 for the second round in a row and with a new lap record. B grade fastest qualifier was Wade Hayward from RPG 90, in an impressive first outing with us. Most of the usual suspects were quick, with Zenspeed #1 just missing out on Pole and starting 8th. The top 10 were all under the previous lap record from 2018, indicating the massive change in grip level as rubber has built up on the new track surface. Our President and VP lined up side by side on the 7th row of the grid, one being particularly happy with this and the other not so. Further back were Hellrazor, returning after a short hiatus but no doubt hoping for a little more from their new kart in the race.

The flag dropped and away we went, paying Pole sitter Chris Aoun in 56 hurled himself into turn one first, lead through turn two, however fell short of the trifecta being hustled out of the way by his teammates into turn three. Turn one at Lithgow often sees a bit of drama but this time everyone filed through cleanly, including P and VP who managed to not trip over each other and create a headline.

Not long into the first stint came our first of two Safety Karts for the day. Unfortunately kart 56 didn’t gain any luck starting from Pole, with a loose clutch and dropped chain parking them at the bottom of the circuit. This brought on a flurry of pit activity, with the lead karts sneaking in for a drive-through before the safety kart was deployed. Of the karts that didn’t were Hellrazor, gunning for track position and Shot Vixen being well steered by Mr. President Matt Hill. Call it a bad strategy call or what you like but it put him in a position to take the lead of the race not long after the restart, a first for a long long looooooong time and a first for Shot Vixen. They were however the cause of the only other safety kart later in the race, however that would not dampen their spirits on a positive day.

The pace all day was being set by the #1 Zenspeed factory kart, with all Zenspeeds in fact showing great speed and taking it to the Maverick brigade. Different strategies played out and while it was hard to gauge exactly where everyone stood, it was clear that only the Maverick trio or bad luck was going to stop kart 1. After the last round of pitstops, kart 58 emerged 8 seconds behind kart 1, setting up a tense final hour. There was no stopping the Zenspeed though, with new recruit Benito Montalbano showing no signs of stress and maintaining the gap to the flag. Maverick 58 pushed them all the way, coming home 2nd ahead of their two sister karts 59 and 57. The old hacks in Buildline drove a strong race to 5th, with Preston Hire 15 further back in 6th, not having the pace of the front runners at any stage of the day.

B grade provided some strong performers as always, with the front pack mixing it in the back end of the top 10. Usual suspects and Championship leaders Joker racing 5 never looked likely though, struggling for speed along with their Joker siblings. The high grip surface seemed to have caught out many with kart setup. Eltoro 97 looked set for a big day in their Zenspeed, only for a carby issue adding Lithgow to their list of hard luck stories for 2019. RPG Racing 90 always looked likely, however were outdone in the end by a very consistent and fast Preston Hire 81, flying somewhat under the radar to emerge with a significant lead after the final pit stops. The Young Guns would bring home the first win for kart 81 and give Zenspeed a double victory and memorable weekend. Second was RPG 90 and a commendable 3rd on debut went to King Pin #54, run from the Joker stable. Congratulations and welcome aboard.

So in a wrap, a great day for Zenspeed claiming the first outright win for the brand and the B grade win to top it off. Above all though, we were racing for a very good TEKA friend on the weekend with a heavy heart. Thank you to everyone at the track who helped us pay our respects to Marco on Sunday morning. We are all competitive on track but it’s the friendships formed off the track that are the best part of this club and this sport. If anyone is going through a hard time, lean on your friends for support and look after each other. Rest in Peace Marco #43.

Thanks again to each and every person from our Officials to our first time competitors and everyone in between for another good weekend in the TEKA memory bank. Next stop is our final round at Orange, our longest race of the year being 8 hours on November 9. It’s a Saturday and we’ll be partying afterwards with our Championship Presentation and 20 year celebration all in one. Stay tuned for more details but don’t make plans to go home on Saturday night!

Written by TEKA on September 20, 2019. Posted in Latest News