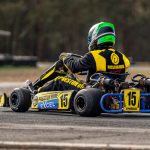 Round 4 of the 2019 TEKA Championship took us to new territory, a small country town known by locals as Grenfell, however now known to TEKA as that place with the hidden gem of kart racing circuits.

Tight, bumpy, uncompromising and full of challenges but leaving drivers smiling from ear to ear. Nailing a good lap around this place is extremely rewarding. The facilities are amazing, including the huge covered outgrid which is perfect for endurance racing.

Going into this round, Maverick 58 had won the first 4 races of the season and 5 in succession including the final round of 2018. Go back a few more races and you discover they had won 7 of the last 8 races. That is some achievement in any form of racing but even more so in endurance racing, where the chance of misfortune is so much higher.

The weekend consisted of two 4.5 hour races, split by a mouth watering roast dinner by the bonfire on Saturday night (more on that later). Saturday kicked off with practice, although most had cut a few laps on Friday and familiarised themselves with the track. There was a tad more importance on practice than usual, as the top 10 would progress to Q2, in a Supercars style knockout qualifying format. The usual suspects were there although Joker Racing 2 had to go the long way from Q1 after coming in underweight during practice.

Qualifying saw no huge surprises. Zenspeed 1 set the fastest time with Steeley on board, however were handed a three place grid penalty for accidently holding up another kart on a fast lap. This meant the front row was a Maverick lockout, with kart 59 beating 58 to Pole and Preston Hire 15 just behind in 3rd. Fastest of the B grade teams was Joker Racing kart 5, keeping the best honest as always.

The two races that followed were full of action, obstacles, suspense, heartache, elation and some immensely good racing. Zenspeed 1 set the pace early on Saturday but was out of the running after just 20 minutes with a broken stub axle. They weren’t the only hard luck story up front, with Maverick 59 losing an engine and spilling oil all over the racing line. This meant an enforced lunch break for all, with a red flag required to clean up the track to a safe condition again. What followed on the restart had to be seen to be believed. In a lot of cases, an engine failure is day over. Not for the Maverick army though, who completed a complete engine change in 1 minute 36 seconds and resumed racing. They finished the race in 4th outright, which is an unbelievable team effort. They followed Dynamite 27 across the line with another solid podium adding to their consistent points haul for 2019. The two lead karts were in a league of their own though, 3 laps ahead of the field. The last hour of the race was of qualifying intensity, with Paul in Preston Hire 15 chasing down Drew in Maverick 58. Kart 15 took the lead mid stint and looked likely to bring the domination of 58 to an end. Drew had other ideas though and a never give up attitude got him in the right place when it mattered, retaking the lead and holding on for a well deserved victory to keep the roll going. The top 5 was rounded out by Double D 44, with a much improved showing. B grade was headed by RPG Racing 90 who were consistently fast all day, ahead of the always improving El Toro 97 and Wild Racing 41, bravely led by our Madam Secretary Moss who swapped his skirt for his pink race suit and produced some impressive driving. The level at the top of B grade is higher than ever, with many mixing it for top 5 outright results and better. Sunday’s race was another that went down to the wire. Just when you thought things were going to script, mother nature intervened to keep everyone guessing and teams biting their fingernails off. Early in the race it was clear that the run of luck for Maverick 58 had come to an end, with a deflating tyre and an on track incident (involving the sister kart 🤦🏽‍♂️) putting them well down the order. Maverick 59 held hope of keeping the team on the top step and Aaren inherited the lead from Paul in Preston Hire 15 with 30 minutes to go, looking strong after the damp conditions set in. The rain intensified to the point where it was a battle for survival. With 25 minutes to go, the Joker Racing karts both changed to wets and set about making inroads on the leaders. This sparked a flurry of pit activity, with kart 15 pulling the trigger soon after and kart 59 following as a reaction to their nearest threat. The earlier stop and fast tyre change gave kart 15 the undercut and a 1 lap lead over 59, meaning a safety first approach to the final laps of the race would bring them home in P1. Their first win of the year and the first win for any team other than Maverick 58 since Round 6 of 2018. Maverick 59 came home 2nd, Joker Racing 5 an impressive 3rd outright and 1st in B grade. Zenspeed 1 had a better day, although not without issue, salvaging 4th from Patriot Racing 87 in 5th, the Raddatz siblings and young Jack bringing home a solid result. Wild Racing 41 and RPG Racing 90 were 2nd and 3rd in B grade, rounding out consistent weekends for both teams.

The combined results from the weekend resulted in an outright win for Preston Hire Racing kart 15 and B grade win for RPG Racing kart 90.

As good as the on track action was, I think most would agree the off track antics were just as good. BBQ’s, roast dinner, camp fires, caravans, tents, swags and an all round great atmosphere.

The eleventh hour decision to add Grenfell Kart Club to our calendar may just be one of our best yet. The volunteers from Grenfell can’t be thanked enough. When you offered to put on a dinner for us we didn’t expect a kitchen full of volunteers and a buffet three course meal. No words can explain how grateful we are for the time and effort you put in to make our stay so enjoyable and make us feel so welcome. We will recommend you to our fellow endurance clubs and definitely be seeing you in the future.

We are equally grateful for our own Officials, again giving us their time so that we can fulfil our racing fix. The weekend produced more challenges for them than we’ve probably seen in the last two years. They came through it with their heads held high and made the best of difficult situations.

Last thanks goes to all of you fellow racers, from the young up and comers to the old hangeronerers and those of us who fit somewhere in between. The racing, the banter and the mateship is as good as it gets.

Next stop for the TEKA bus is Port Macquarie on August 10 and 11. Stay tuned for more details real soon. Get on the bus and see what endurance karting is all about. We have hire packages available as detailed on our website – www.teka.com.au.