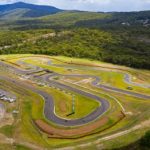 Maverick make it Two to start 2019

T’was the day before Canberra, and all through the track not a go kart was stirring, not even a junior. The tyres were stacked in the pits with care…… Whoa, hang on scrap that!

Saturday at Canberra was the biggest practice day I think TEKA had ever seen, especially for round 2.
Of the 29 kart field, the biggest ever for the yearly trek to the Nation’s Capital, 26 karts were there for “unofficial” practice. All finessing set ups and going for early quick time bragging rights, even though no one was admitting to anything.

Come Sunday, race day, the pits were abuzz with the normal scrutineering, practice and qualifying ritual that takes teams on the crazy roller coaster of emotions. Ranging from, we’re here to have fun, to where is my freaking bead breaker, to why the hell did we just go 3 seconds slower on new tyres. Ahh the fun of karting.

Qualifying, as is becoming the norm in TEKA was incredibly close with the top 18 karts all within a second of our eventual pole winner, Zenspeed #1, piloted by the quick Kiwi Scott Mc… oh sorry, Steeley.

The race start (which was ahead of time btw) and following first stint was awesome to watch from the grandstand with the lead swapping many times between Zenspeed #1, Hellrazor #13, SKW #2, Maverick #57, 58, 59, 60, 61, 62, 63 (well it seems to be that many of them) and Patriot #88 with a fast starting Zac at the wheel. The usual front runners of Preston Hire Gurus #15 and Buildline #27 and #9 were showing an early race pace slump with a large gap growing between themselves and the lead pack.

In B grade the race was just as fierce with a battle brewing between 6 teams wanting that top step. RPG #90, Wild Racing #41, SKW #5, El Toro #97 and the duo from Patriot along with a brace of Preston Hire karts all jostling for position in a fight that lasted well into the final stages of the 500-lap race.

As the laps clicked over into the 3 and 400’s, things started to heat up with many top runners running into problems. Kart 13 Hellrazor continued with its shocking Canberra run of luck with a race ending accident that saw the guys hitting their chassis with rather large hammers. After a short return to the track, decided to pack up early, jump in the mystery machine (complete with shag pile) and make the slow trip home.

The Guru’s from Preston Hire #15 had been chipping away putting together a stunning comeback drive over several hours finding themselves in 3rd place with the checker in sight. The kart though had other ideas with the constant lateral hammering of the Canberra ripple strips seeing the front left C section parting ways with the rest of the chassis seeing them again tripping at the post.

That left what looked like a nail-biting finish between Zenspeed #1 and Maverick #58, however a late drive through by the men from Zen saw Maverick #58 win by 1 lap at the end of 500. Maverick #59, despite a penalty for being underweight came home in a fast finishing 3rd.

B grade teams had their fair share of problems too. #97 had been in contention till late in the race when a coming together saw them visit the pebbles and a top 3 finish go begging. Kart 5 SKW had an engine drama after running strongly for a big part of the first 200 odd laps, with an engine change putting an end to tasting the champers.
That left the B Grade chocolates being awarded to Kart 90 RPG, after a big kart cash injection after Newcastle certainly paying dividends. The boys from #41 Wild Racing fed Max on a diet of lead and house bricks after their Newcastle disappointment, with a return to the podium in 2nd with #88 Patriot coming home 3rd.

Once again Canberra put on a great show, and TEKA would like to that the Canberra club committee for always making us welcome and providing a great facility. Sadly, it will be the last time TEKA uses the track in its current layout. When we next visit the track extensions will be complete and we will have to throw away our track data sheets and start again.

Look forward to seeing you all in Dubbo for our double header under lights. Like Big Kev used to say, “I’m (already) excited”.