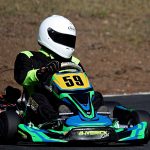 Once upon a time there lived an evil Ogre in a ditch beside the Port Macquarie hairpin. In a fit of rage, he cast a curse over whoever plugged into his track timing loop. The curse lasted for many years until in rode a handsome knight in his lowered white steed. The handsome knight banished the evil Ogre, lifting the curse and freeing the timing loop for all to enjoy its lap counting brilliance.

So, in short, everything worked sweet last weekend.

Not only was the fabled timing loop sweet but so was the smooth as a baby’s buttocks track surface. Everyone was waxing lyrical about the transformation from our last visit and all prior set ups were thrown out the window. Most felt the high pressure of experimenting with tyre pressures deflating, however in the end high pressures were the way to unlocking a quick lap for some.

Qualifying came down to a dual within Team Maverick (my dogs name BTW), battling out for not only pole position but bragging rights between two team karts and two former teammates (perhaps one minutely disgruntled after being shifted from the State Title holding 58 to sister 59). The team boss and older lesser looking Russell brother came out on top over the youngest Ferry man, with Drew in 58 snatching a pole from Liam in 59.

It was Shane’s first go at holding the reigns of the COC and he told me later in the day that he wished there had been a bit more action to put all Karen’s teachings to the test. Five hours, no VSK’s and hardly a spin or a breakdown, a great driving display by all.

While he may have had a quiet day off track it was a different story on track. The pace was hot from the start with the Mavs fighting out for top spot and Preston Hire without the Guru in a battle with a fast Buildline, Joker 2, Atlas 19 and Patriot 87 all fighting throughout the day for the 3rd place on the podium.

B Grade was just as hot if not harder fought than the A teams. Our round sponsor Unifilter 33 set a blistering pace all weekend with a great early fight from both Preston Hire 18 and 81, before a couple of small problems saw them drop out of contention. The ever-consistent RPG 90 and the Wild 41 boys moved up to take on Unifilter, finishing the Saturday leg in that order.

Sunday was ground hog day. With the grid spots set in the one Saturday qualifying session everyone started in the same positions as the day before but with very a different outcome.

While Saturday was incident free, Sunday was the opposite, with a lap one coming together at the back of the pack taking out 4 karts including our B grade 3rd place Saturday finisher and Championship contender Wild 41. The smart ones saw the opportunity for a sneaky drive through before the VSK board came out and the pits were shut. This proved to be a master stroke for the Buildline boys that became apparent later in the day.

At the restart the Guru’s guru who jetted in overnight and the Joker 2 pilot Nipperess got the jump on the Mavericks and held a healthy gap on the green machines, swapping places in a very entertaining display for the entire stint.

Unfortunately for them the pace did not last. As the race unfolded Maverick 59 and 58 moved to the front with the opportune Buildline boys moving into 3rd after the well-timed early drive through.

B grade was again a close affair with the usual suspects 33, 90, 5, 97 and the bumble bees all trading places throughout the day.

At the fall of the flag on day two it was time for the lap counting boffins to put on their pointy hats and break out the abacus to work out the round winners. The prize was made all that more special with some awesomely unique trophies supplied by our round sponsor Unifilter up for grabs. The lumps of iron bark laser cut wonders a perfect fit for the “track in the trees”.

When the dust settled in the tower the results were handed out with Maverick 59 pipping Maverick 58 for the win, with Preston Hire Gurus 15 filling the 3rd podium place.

A great weekend had by all and a huge thanks to our awesome team of officials and committee. Also, a massive thanks to Jamie and his team from Port Kart Club who not only got that curse lifted but were a pleasure to deal with and the canteen food was some of the best.