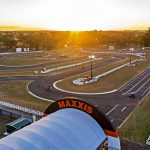 Forget the ZOO the Endurance State Titles are on!

One of the biggest events in the history of Endurance Karting took place on the weekend of the 18th & 19th May!

The TEKA members were faced with a laid back timetable based on the need to share the track with 4SKA. Friday saw the members sunning themselves and socializing in the 45minute breaks between practice sessions. A lack of formal timing saw various members walking the paddock looking for information like a reporter hungry for their next breaking story.

The big guns we out in force early, Maverick setting up by the side of the track bringing their data analysts, dieticians, physios, and long list of accomplished drivers. Patriot Racing had already broken the salary cap on their star driver line up, but had enough left over for some of the best liveries and outfits we’ve seen.

Hellrazor also arriving early to find the secrets required to perform well and make up for poor results with early mechanical dramas so far in 2019. Although their motorhome (resembling something out of an 80’s psychological thriller where someone is abducted), is a far cry from the likes of the almighty Joker’s workshop on wheels they’re still an experienced team with a reputation for speed.

Zenspeed #1 have form but time will tell whether their team owner and race director staying behind to pursue other interests bites them in the ass or not. Rumour has it that their gun driver has convinced the team owner that there may be other karting catagories outside of TEKA…. wrong! Regardless, 3 hardened old school drivers are there to fly the flag.

Zenspeed, the most recent in Zen karting movements was well represented with the beautifully presented Vantage Team #7 relaxed as ever, recently converted Uni Filter #33 with a stunning new kart and graphics, Allyman #16, and the ageing Buildline race team with El Toro #97 and Dynamite #27 representing the construction outfit this weekend.

Preston’s Hire always looking like there at a show ’n’ shine beautifully turned out and professionally run outfit, all 3 karts expecting to be competitive.

RPG #90 have managed to avoid too much contact this year, the livery still hot boys, and Wild Racing #41 consistently getting quicker are close to making themselves much more known atop the B grade podium.

Atlas #19, not silly bringing 2 perfect identical race prepped karts just in case one is quicker than the other. Problem is when the boys prefer opposite karts to each other… lol. These guys are real quick, cudos to them for taking on A grade, again the bar has been raised, the result now an insane level of speed, consistency and reliability from the majority of the class.

Great to see #71 back out of Canberra, there’s a mixed amount of karting experience in that team but plenty of racing experience, they’re on the money in their class too!

Welcome also to St Croix Racing (aboard the #99 Zenspeed Preston Hire Kart) who join us from 4SKA where they’re established high performers and last years Champions.

Friday wrapped up with TEKA and Dubbo Kart Club erecting the necessary light towers for what will be a spectacular Saturday night 4hr sprint.

A scheduled late start on Saturday saw TEKA members spend it in all sorts of ways. Most enjoyed dinner and drinks out on the Friday evening (some continued on in their room unit early hours of the morning). Come Saturday people relaxed around the hotel, walked, shopped, voted, and brunched on what was another perfect Autumn day.

The feeling across the membership was that this unusually relaxed timetable was a welcome change. We’ll see how everyone feels post race 11.30pm sore, sorry and still packing up, and with a 7am start Sunday morning, shit gotta give somewhere! Regardless we all enjoyed the vibes across Saturday in the anticipation to the event start!

Mid-afternoon Drivers Briefing out of the way, welcome Karen Cameron and officials, fuellies and other support, official practice could get underway.

In B grade the flying Joker #5 boys out of the Starkey garage were setting the pace. Congrats to a returning Preston Hire Racing #81 with an impressive 3rd amongst solid company. Vantage #7 and El Toro #97 were next in line, 2nd place to 6th only separated by 2/10ths of a second.

Qualifying not surprisingly saw Patriot #87 & Maverick #59 at it again, this time Patriot just getting the upper hand and securing pole position! Maverick #58 contributed to the team’s performance with 3rd followed by old school TEKA faithful Dynamite #27.

In B Grade a cracker of a session saw many competing at the top, but nailing an awesome lap time that in the end could not be bettered was Preston Hire Racing #81. Wild Racing #41 and El Toro #97 fought hard for 2nd and 3rd respectively only 5/100ths between them.

5.58pm the sun’s gone down, the track lights are ablaze, and 28 karts are lighting the night with the occasional fire from the exhaust (not really) form to create the grid for the very first TEKA state title!

The green flag is dropped by our very own flag man Rob (in a weird and different way every time mind you) and the best of the best endurance teams in the country are into it like it’s a bloody 10 lapper, and the amazing thing is that in recent times that’s how it continues for hours until the chequered flag drops.

The racing was close with battles ensuing right through the field right till the final laps of Race 1. In the closing stages it was sad to see a dominant Maverick #59 lose a wheel. Preston Hire #15 inherited the lead, for no more than half a lap when they were also hindered by a terminal problem. Maverick #58, in somewhat of a Bradbury finish but nonetheless deserved, would drive home for the win with the following 2 kart karts only 10 seconds behind. An exciting finish for 2nd with Hellrazor #13 just beating home Joker #2 by merely 1 second. Zenspeed #1 without their Sensei Master a solid effort managing 4th finishing on the same lap.

The B grade racing was just as competitive but at the end of the day a fast consistent effort by the Joker #5 outfit. Unifilter #33 competed for the lead throughout the night, 2nd only half a lap behind. A well deserved 3rd place for Wild Racing #41 followed by RPG #90.

A late finish and pack up saw very little alcohol consumed post-race, rather most teams rushing back to their hotels to get some rest before an early start to do it all again. Will the same teams dominate, will we see a safety car, will the day times warmth effect the handling of some teams and not others? 10am Sunday 19th May and the 2nd stage of the weekend event and we’ll begin to find out.

After a brief warm up the noise of 28 thumping 4 stroke karts made their way to the start line, the crowd built in anticipation for what was going to be and exciting finale to a historic State Title weekend.

The flag dropped and the sight was unreal, a huge pack of adrenalin fuelled karters jockey for position, nose to tail formations right through the pack. The pace over the 4 hours didn’t let up, teams respectfully doing battle like there were only laps to go.

The usual suspects we again quick although Patriot #87 suffered some minor issues including a penalty which set them back. Preston Hire #15 had the speed all day to challenge for the win, bad luck saw them have to complete the last stint with a broken clutch spring. Due to their competitiveness throughout the day they still managed a solid 3rd place. Teammates in the Maverick stable didn’t consider the idea of team orders, instead going for broke and racing each other to the line. A hard charging Maverick #59 ran out of laps to cover the last 4 seconds to new State Title Winners Maverick #58 for the win!!!!!!

Dynamite #27 keeping their championship hopes well and truly alive with 3rd place followed by Zenspeed #1 and Joker #2, both capping off a great weekend.

The battle for B grade honours saw 3 karts finish on the lead lap, all showing relentless pace throughout the day. Becoming true contenders the El Toro #97 boys out of the Buildline stable raced home to a well deserved 3rd. Unifilter #33 were at times odds on to take the win but certain things didn’t go their way, still happy heading home with a 2nd place. After 4 hours of racing only 26 seconds up the road were the winners for the day, and taking out the weekend for their class, Joker #5. A great weekend for the Andrew Starkey & Gavin Norman run team and the family of Jokers!

The Championship point structure shows you can have a bad round and bounce back into contention with a solid performance. In saying that if you keep winning you’ll stride away into the distance, Maverick #58! Who’s going to stop them? Maverick #59, Dynamite #27, Zenspeed #1 and Preston Hire #15 have the speed on a good day but they’ll have to make an impact the very next round, or the Maverick #58 ship may sail for good!

An easy trip down the Hume to Grenfell where the club will host with a spit roast and beers! Bring your tent, motorhome, camper or caravan and enjoy the fire! If a hotel is more your flavour get moving because accommodation options are limited. TEKA is expecting a capacity field and if you’ve seen the track its going to provide for some tight racing!