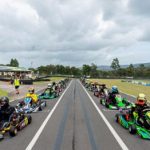 Endurance Karters do it longer, and the numbers really do stack up.

There are two clubs that run their events under the Karting New South Wales banner, and both are enjoying healthy grid numbers and having outstanding success.

For both clubs, the Briggs & Stratton package is the engine of choice, and whilst there are slight technical differences between them, both clubs utilise pretty much the same power plant.

For TEKA, Briggs Animal Engines have been the norm for many years now, and the club recently held its first meeting of 2019 with twenty-eight teams battling it out for round one honours.

Twenty-nine karts and Ninety-two drivers will contest round one over a six-hour race duration.

For TEKA, it’s a seven-round championship for 2019, whilst at 4SKANSW Inc, the club will embark on eight rounds to decide their first Briggs 206 Champions.

For the first time ever, TEKA and 4SKANSW Inc. will hold a joint meeting at Dubbo in May, the purpose being to promote Endurance Racing together, and ultimately, hold the largest Four Stroke Karting Meeting held in this country.

This meeting is the result of increased networking between key committee members from both clubs – there came a point where we all realised, we were here for the betterment of the sport, and since then – whether it be with the new rule book, or just having each other there for another opinion – we haven’t looked back.

Whilst overall karting numbers have decreased at club level events over the recent period, quietly and without fuss in the background, the endurance clubs have done a lot to keep the sport of karting alive in NSW.

Endurance racing is as strong now as it ever has been, and it’s only going to get bigger and better.

Both clubs may utilise very similar power plants, but there are some differences that ensure each series is unique. Neither club see each other as competition, in fact, it’s the total opposite to that with more and more drivers crossing over to race in each series.

TEKA karts have two Briggs Animal engines, utilise a frame made to accommodate the dual power plants, and have a top speed in the vicinity of 100kmh. Like the engine name suggests, these are the Animals of the endurance karts, they get up and go and really put a smile on your face.

4SKANSW Inc karts utilise a single Briggs 206 engine, are rev limited to 6050rpm and have a top speed in the vicinity of 85kmh. These karts utilise a normal sprint kart frame, and with increasing demand around the world, more dedicated four stroke designed frames are becoming available here in Australia. These things are the Formula Vee of karts: they don’t have a lot of power, but only the good drivers make them go really fast! Most importantly though, with fields around thirty karts, you’ve always got people around you to race, and everyone has the same amount of power to play with.

The increase in interest in four stroke sprint racing has had the spin off effect of increasing endurance race participation. Four stroke sprint racing is the next growth area in our sport, and competitors with the Briggs 206 power plant can easily cross over to dabble in Endurance events. Just be warned if you do, you will get hooked.

Drivers are attracted to the bang for the buck, lots of laps for the dollars spent. Whether it’s a bunch of mates sharing the cost of a kart to go racing, or a family doing something together on the weekend, Endurance karting offers a full days racing and very often, a big social weekend away.

For both clubs, Karting New South Wales is a great fit, both clubs attract highly skilled drivers and many events are won by a matter of seconds, but we’ve always been for the club level karter, and that’s why we attract such a broad range of people to both series.

If you’d like to learn more about Four Stroke Endurance racing, or view he race calendars, visit:

Written by icondigital on March 7, 2019. Posted in Latest News